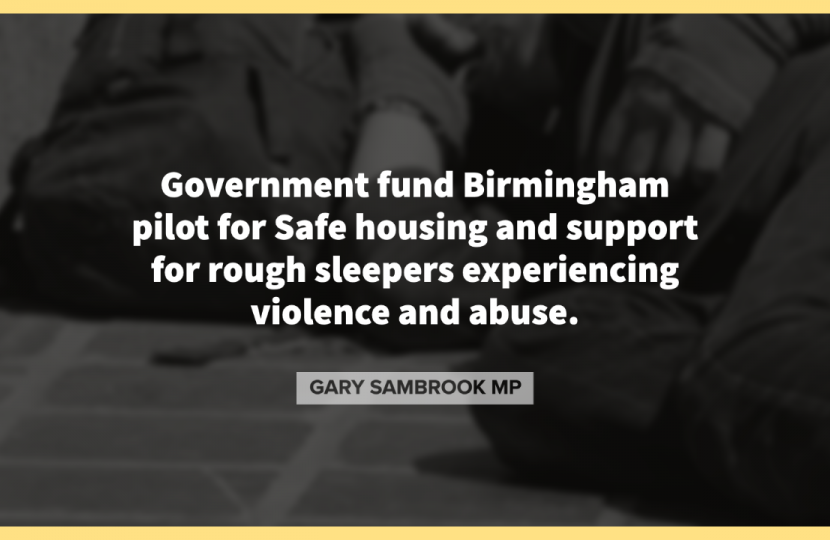 The Respite Rooms Trial Programme will see 12 local areas across England share £3.7 million to fund accommodation and expert support for victims of violence and abuse.

Rough sleepers experiencing violence and abuse will be provided with safe housing as part of a new pilot programme, Minister for Rough Sleeping and Housing Eddie Hughes announced today (26 July 2021).

The Respite Rooms Trial Programme – first announced by the Chancellor in the Budget – will see 12 local areas across England share £3.7 million to fund accommodation and expert support for victims of violence and abuse.

Under this pioneering initiative, safe housing will be offered to victims of domestic abuse, rape or sexual assault, sex workers, victims of exploitation, or violence who are sleeping rough or at risk of rough sleeping.

The funding will create a total of 140 bed spaces and support an estimated 1,100 people over a 12 month trial period.

The programme will provide a single gender spaces for victims alongside specialist support from homelessness and domestic abuse and violence against women and girls charities.

This will also include support those with multiple and complex needs such as substance misuse, migrant victims of abuse, and victims of sexual trafficking.

As part of the programme, victims will be offered advice and support to access suitable more permanent safe accommodation.

Survivors of domestic abuse, sexual violence or physical violence need a safe place of refuge to escape these crimes and rebuild their lives.

These respite rooms will provide a safe space and ensure vulnerable people at risk of sleeping rough are supported in safe housing with expert advice and counselling.

This programme is part of the government’s much wider action to help the most vulnerable in our communities, with £750 million investment this year to tackle homelessness and rough sleeping.

The 12 areas across England that will receive funding under the trial programme are: Bournemouth, Christchurch and Poole, Birmingham, Bristol, Camden, Hastings and East Sussex, Exeter, Leicester, Liverpool, Manchester, Nottingham, Portsmouth and Westminster.

Today’s announcement is part of the government’s comprehensive plans to tackle domestic abuse and support victims of sexual violence and abuse, and to support rough sleepers off the streets for good.

Under the government’s ground-breaking Domestic Abuse Act 2021, councils will be required to provide life-saving support in safe accommodation for domestic abuse victims and their children who require it, backed by £125 million of government funding.

This funding is part of the long-term strategy to provide comprehensive support to victims, and in addition to £40 million funding boost for victim support services announced earlier this year, as well as a cross-government victims strategy that works better for survivors.

A full breakdown of the allocations under the respite rooms trial programme is below:

The programme is aimed at supporting rough sleepers or those at risk of sleeping rough who have experienced the following:

Newly released figures show that 740 police officers have been recruited in West Midlands as part of the Conservative Government’s pledge to put 20,000 more officers on the streets by 2023.